While my Hufflepuff scarf gradually grows, I’ve been practicing with color. I can now keep two separate strands tensioned on my left fingers while I crochet. Yes, the above swatch is crocheted! Tunisian knit stitch makes for a bulkier textile than I usually like, but it looks very neat. Rather than the “k”s of Tunisian simple stitch, it makes “v”s!

And Camp NaNoWriMo is going swimmingly. I’m even a bit ahead of schedule and having bunches of fun with my lovely cabin mates.

Look what I made!

I don’t like sewing seams on crocheted projects. In making up the pattern for this jacket, I endeavored to leave as little sewing as possible. If I had a double-end crocheting hook in the correct size, I would even have tried to do the sleeves in the round. (P.S. Tunisian crochet in the round is fun stuff.)

I saw pictures of this style of sweater online, and the first thing I did was go back and find the tutorial I encountered once for a Tunisian Ten Stitch Blanket. Makes total sense, right? No? Well, I wanted to learn how to join diagonals and sides as I crochet, and this teaches it all.

I worked each of the five sweater pieces (right front, right sleeve, back, left sleeve, and left front) from the neck down, joining to the previous pieces at the shoulders and sides as I went.

And the decorative stitches are ones I learned from My Tunisian Crochet, an awesome blog I have highlighted before.

I hope to work out the kinks in this pattern and write it all down, because I found it an attractive and relatively simple way to make a sweater.

I’m still working out what I want to do with a bunch of sweet green wool yarn I was gifted. Right now it’s going to be a Tunisian crochet afghan. (Click here for my tutorial on basic Tunisian crochet.)

Since I’m using only one color, I’m experimenting with lots of different textures. My main resource for the different stitches and patterns is this website: My Tunisian Crochet. Sadly, some of the links on the site are broken, but the information that is there is fantastic, especially the youtube videos of how to work different stitches. Head on over if you want to spice up your Tunisian crochet repertoire.

Here’s the afghan stripe on my hook right now. I love the texture!

I needed to make some potholders for the kitchen at my church because I may have inadvertently set one of theirs on fire back in December. Umm, anyway… I thought to myself, I know a technique for good dense textile: tunisian crochet!

It’s also an opportunity to try out the tri-color method my mother-in-law introduced me to. 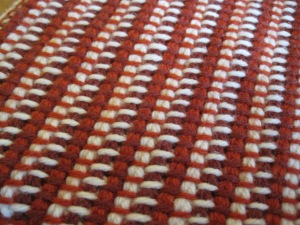 Tunisian crochet–or Tunisian carpet stitch, as I first heard it called–uses a long crocheting hook. It’s like a knitting needle, but hooked. You start with just one loop on the hook, and you go along the base chain or previous row, picking up loops. Then you make a return journey, basically doing a single crochet through each loop from last to first. At the end, you have one loop left on the hook, and you start over again. (For more detailed instructions, see my later post: Tunisian Crochet Tutorial.)

I’d say it’s even simpler than regular crocheting, though it is more time-consuming.

It makes a tough fabric that curls on itself a lot like stockinette stitch, but it has a neat almost woven texture. 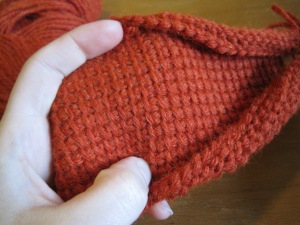 The pair of potholders I’m making are double-sided for extra thickness and anti-curling. I secured the front and back together with a round of slip stitches. 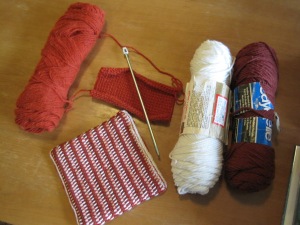