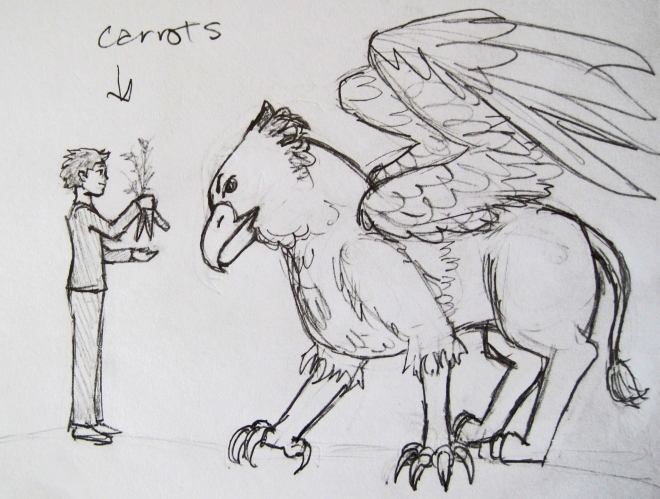 I don’t have to worry too much about getting food. I get it from the store. I cook it. I eat it. Maybe I’m super awesome and grow my own strawberries or tomatoes, or maybe I don’t.

How do your fantasy characters get food? What does the economy and infrastructure have to be like so your party can mosey on into a tavern at a crossroads in the middle of nowhere and get a meal along with all the other patrons there that night? And is your economic system consistent over a whole shire, state, country, or planet? Whatever your setting, it’s important to consider economics. Magic, especially teleportation abilities, will have a big impact.

My husband and I put together a story idea about a society made up of humans and griffins, at about a 1:1 ratio. For a while, we assumed our griffins were carnivores–you know, because they’re half lion and half eagle.

Then we considered the economics of the situation. What, and how much, did the griffins eat? We asked the internet how much meat a lion eats in a day and realized that with the scale we were considering, all the prey in the area would get eaten up pretty fast. And we didn’t want to make our griffins be nomadic while the humans were agrarian. Ok, so maybe the humans raise goats and the griffins eat those. Bam. Solved.

Until we calculated how many goats it would take to keep a family of griffins fed for a year. Something like 200 goats per family. That wasn’t going to work either.

So, obviously, the griffins were omnivores. If a creature can be both a bird and a mammal and have six limbs, it can darn well be an omnivore if we need it to be. Now we have griffins helping out with plowing and harvesting in the fields, hunting game in the woods, and eating the same meals as the humans.

Don’t be afraid to ask hard questions of your setting, or let others ask. In the end, your story will be healthier.